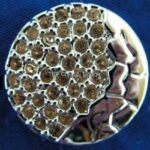 A small round rhodium pin with smoky quartz crystals to represent “earth”. This pin was the final pin of those produced to coincide with the Endangered Wildlife series. It was given to SCS members attending events during 2010.