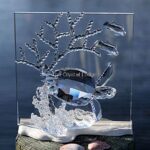 The annual piece for 2006, Eternity was the second of the “Wonders of the Sea” trilogy, representing a welcome return to animal trilogies. The entire trilogy was available in either colour crystal or clear and was designed to interlock to form a complete underwater scene. For this reason, Swarovski marketed Eternity from its launch in 2006 through until the end of 2007 when the trilogy retired. Collectors were able to buy both the clear and colour versions as part of their membership benefits. A separate plaque was available for each piece of the trilogy which shows the name of the piece and the trilogy and it was also possible to purchase additional extras including an LED stand.

Eternity depicts a turtle swimming from left to right, and is designed to sit on the left of the display of the 3 trilogy pieces. The top right hand side has 2 small fish which when placed next to Harmony join the school. A single turtle is the central feature and behind the turtle is a frosted coral or rocky outcrop, which has seaweed “sprouting” from it.

PLEASE NOTE THAT THIS PIECE WEIGHS OVER 2KG, AND FOR THAT REASON WE CURRENTLY DO NOT ACCEPT INTERNATIONAL ORDERS FOR IT HAS TO BE SENT BY COURIER, WHICH IS WAY OVER THE SHIPPING CHARGE WE HAVE SET.