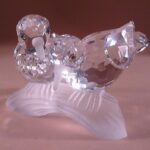 The Turtledoves (Amour) were the third Annual Edition made for SCS members, and the final piece in the “Caring and Sharing” trilogy. It depicts 2 Turtledoves on a branch. Hand assembly can give rise to different positioning of the 2 birds. The turtledoves are made from clear crystal and have frosted beaks, and they sit on a matt crystal base designed to resemble a branch/log. This piece can only be found with the swan SCS logo.